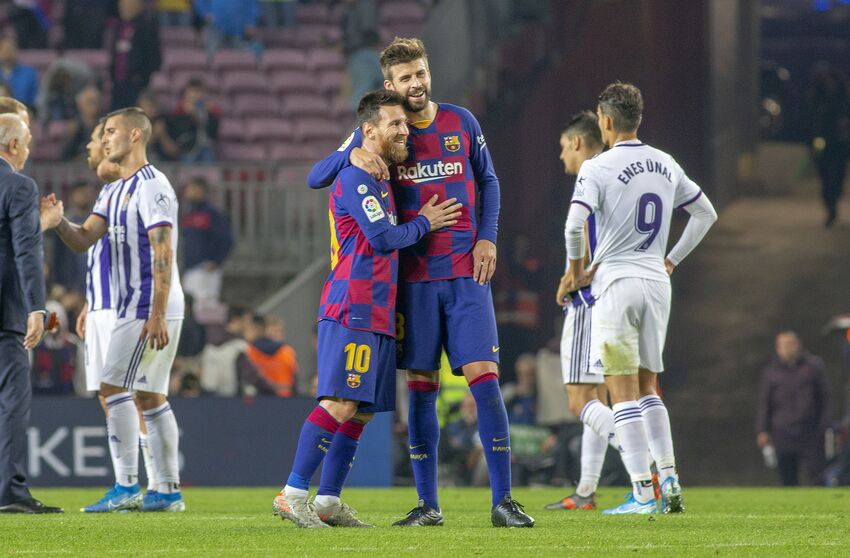 BARCELONA, SPAIN - October 29: Lionel Messi #10 of Barcelona is embraced by Gerard Pique #3 of Barcelona at the end of the game during the Barcelona V Real Valladolid, La Liga regular season match at Estadio Camp Nou on October 29th 2019 in Barcelona, Spain. (Photo by Tim Clayton/Corbis via Getty Images)

With Barcelona requiring a successor to Gerard Pique soon, Lionel Messi has come up with an ideal candidate’s name as suggestion.

Barcelona defender Gerard Pique has been slowing down since the last couple of seasons and is one of the several regulars from the squad which need to be replaced. The former Spain international has been a colossal figure in the backline next to Clement Lenglet lately, but it is high time that another central defender is signed.

Samuel Umtiti was the early favourite to take over the reigns from Pique in the centre of defence, but the France international’s career has taken a twist since the 2018 FIFA World Cup. Umtiti has been getting injured on a consistent basis and even after recovering, he is suffering prompt relapses which have led to him being on the club’s transfer list.

Ernesto Valverde’s side was in the transfer market over the summer to sign the in-demand Dutchman Matthijs de Ligt, but some exorbitant transfer fees and wages meant that Barca passed up on his signing. As it turned out, Juventus snapped up on him but the Catalans may arguably be grateful for missing out on de Ligt since he’s possibly a one season hype.

Diario GOL has reported that as Lionel Messi understands the importance of having Gerard Pique in the squad, he has suggested that the club signs a replacement for him as soon as possible. The captain believes that Inter Milan defender Milan Skriniar would be the perfect successor to the Barcelona veteran.

Milan Skriniar has been one of the world’s best defenders in the recent months and was on the radar of several European giants over the summer. But Inter Milan held on to him and he is an integral part of Antonio Conte’s plans. However, Barcelona will go for him regardless of his standing at Inter and would need to pay 60 million euros at the very least.

Do you think Inter Milan would let Milan Skriniar join Barca despite their bright plans for the future?