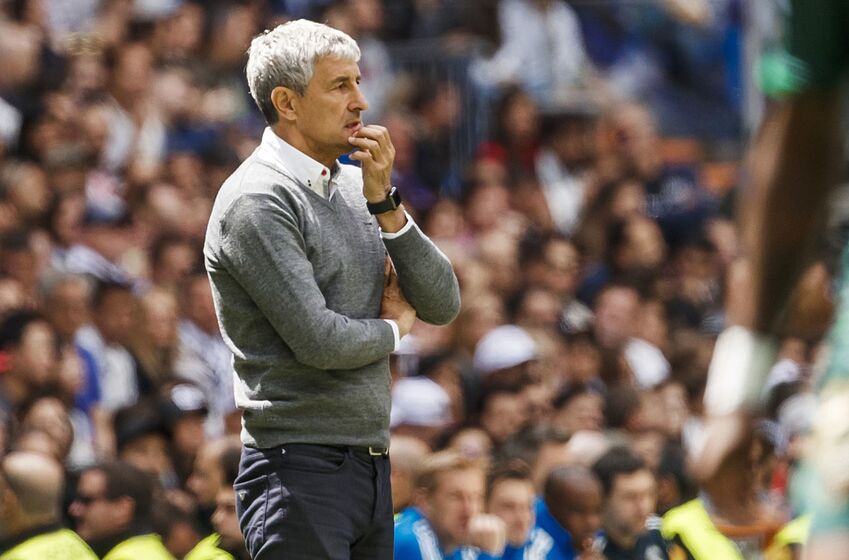 MADRID, SPAIN - MAY 19: Head coach Quique Setien of Real Betis Balompie looks on during the La Liga match between Real Madrid CF and Real Betis Balompie at Estadio Santiago Bernabeu on May 19, 2019 in Madrid, Spain. (Photo by TF-Images/Getty Images)

Quique Setien’s agent is in Barcelona negotiating terms with the club hierarchy.

The drama surrounding Ernesto Valverde and his status as Barcelona boss appears to be over with the club deciding to relieve him of his duties following the loss against Atletico Madrid.

Perhaps the more surprising news is that former Real Betis manager Quique Setien is the favorite to take over according to both Catalan outlets, Mundo Deportivo and Diario Sport.

In fact, Setien’s agent is reportedly negotiating the terms of his contract.

Other names like Mauricio Pochettino and Max Allegri were rumored to be of interest but it looks like the club’s choice will be Setien.

The ex-Betis man holds the distinction of being the last manager to take an opposing team to the Camp Nou and come out with a win.

His style of play is attacking holding similar philosophies to the game as Johan Cruyff.

One can assume that will be the biggest selling point once his appointment becomes official.

The knock on Valverde was that he was too conservative as a manager and set up his team not to lose rather than to win. To simply give the ball to Lionel Messi and let him do all the work.

It is hard to speculate how much change, if any, we’ll see once Setien takes over. He works well offensively but defensively leaves a lot to be desired and that’s been Barcelona’s problem this season.

The terms of the deal will be crucial because despite Xavi deciding not to take over now, his plan still remains to one day be the manager of Barcelona. Therefore, will Setien’s contract only be for the rest of the season and then be re-evaluated at the end? Or does he come in knowing he’s nothing more than a caretaker.

Either way, a change in management needed to be made. An argument can be made whether it was handled correctly and judging by the reaction of former players and managers, it clearly hasn’t.

The next six months should be interesting with Setien likely doing everything in his power to convince the board that he is the right man to take this team forward not just in the short-term.